10 Must-See Convenience Stores from around the World You want quirky? We’ve got it!

If you follow SSCS on social media, you know we embrace the variety of business approaches practiced by petroleum retailers across the developed world. Many are unique. Some are quite idiosyncratic.

It’s part of what makes the industry so fun.

This week, instead of simply tweeting out links to other sites that feature unusual convenience stores, our staff took it upon themselves to see what kind of quirkiness they could uncover to share with our readers—architectural, philosophical, customer-related, or anything else that stood out. It was no surprise that, among the millions of convenience stores out of which business is conducted around the globe, they found any number of quirky proprietors surrounded by equally quirky environments. In this two-part blog entry, we’ll look at some of the stranger and more arresting convenience stores (and circumstances!) that you might run into if you’re traveling around the world. 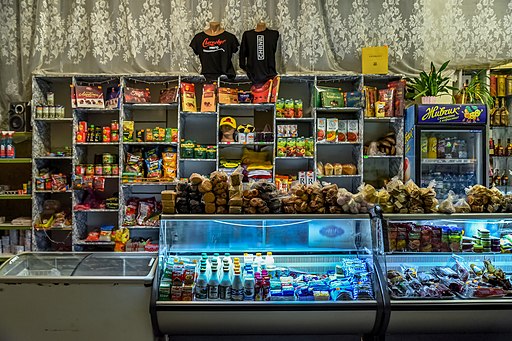 Bring your Geiger counters and lead vests, it’s the Chernobyl convenience store! Located in the far central north of Ukraine, just across the Belarusian border (not Kojak’s favorite country), this little business doesn’t hesitate to use the area’s 1986 nuclear disaster to sell T-shirts and other specialty products. Chernobyl has largely recovered from the reactor calamity. Locals and tourists alike use this store to acquire a wide variety of goods, from soda to liquor to baked goods to quirky hats. Photo by Jorge Franganillo. 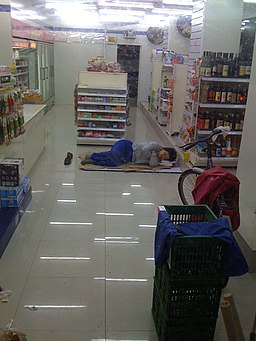 In Shanghai, thousands of convenience stores serve a metropolitan population of over 34 million people. At its widest point, the city stretches almost seventy miles in diameter, a sprawling mass of streets and transportation networks bewildering enough to make anyone want to lie down and take a nap—perhaps even on the floor of their local convenience store! In the midst of a bustling city known for its heat and humidity, a convenience store can start to look pretty comfortable. Photo by Christopher.

8. Convenience Store at the Top of the World (Nunavut)

Located in the Canadian territory of Nunavut, Cambridge Bay is a jaw-dropping 1,720 miles north of Minneapolis, making it one of the most northern settlements on the planet. At that particular latitude, convenience stores must by necessity abandon the frills of neon signs and plate glass windows. Nonetheless, just as they are everywhere, Cambridge Bay’s little business is a part of the daily lives of its residents just as much as any convenience store. (Notice the pajama pants on the customer headed inside!) Photo by Cambridge Bay Weather.

7. Convenience Store in a Cave (Hanksville) 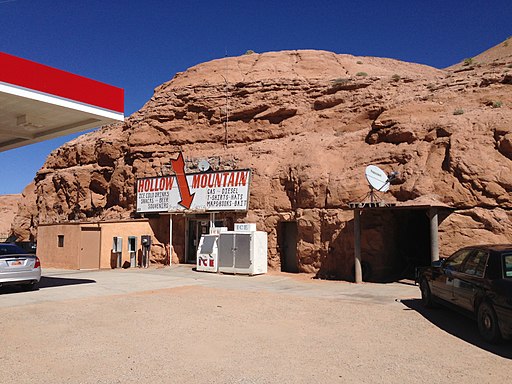 The Paleolithic meets industrial modernity at the Hollow Mountain Convenience Store in Hanksville, Utah! In this unique establishment, the beer cave is literally a cave. Sodas, snacks, trinkets and souvenirs that mark the uniqueness of the business and its location are also provided. One of many treasures of southeastern Utah, Hanksville is situated in a natural wonderland, and it’s only appropriate that its local gas station is as distinct as the town’s surroundings. Photo by Famartin.

Is it a convenience store? A robot? A vending machine? The future is already here in Tokyo’s northeastern sprawl. This little unit sells an astonishingly wide variety of drinks, snacks, fresh foods, and other goodies from a central depository. Its selection is so broad that wrap-around windows are necessary to display all of the goods you can buy. Nestled conveniently in a subway station, the Vending Corner makes sure that even the most shy and timid residents of Tokyo’s suburbs can grab a drink or snack on the go. Photo by Tokumeigakarinoaoshima.

So, is this enough convenience store and -related quirk yet? If you need another dose, come back next week because we’ve got five more locations set up for you. See you then!